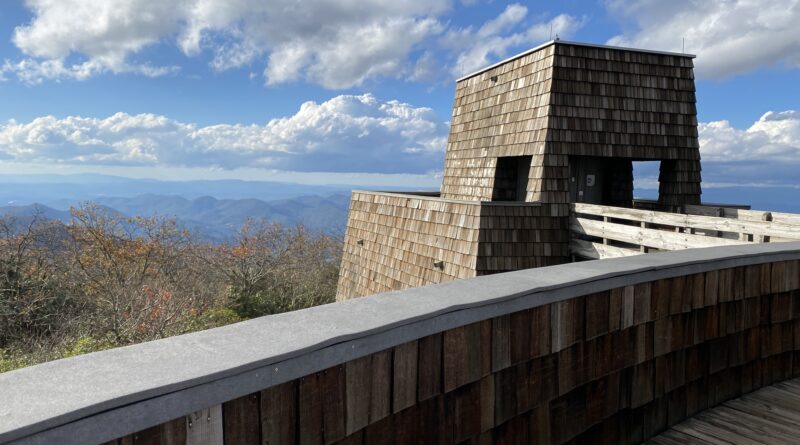 Visitors to Brasstown Bald in the Chattahoochee-Oconee National Forest enjoy 360-degree views of the Southern Appalachian Mountains from Georgia’s highest point. When the weather allows, you can see four states from this one vantage point sitting 4,784 feet above sea level. Operated by the US Forest Service, the observation deck can be accessed by the .6 mile Summit Trail which begins at the parking lot. A shuttle service also runs from the parking area directly to the summit, though visitors should call ahead for availability. Additional hiking trails in the area include the Arkaquah Trail, the Wagon Train Trail and Jacks Knob Trail. Picnic tables overlooking the surrounding mountains can be accessed just off the main parking lot.

The name for Georgia’s highest peak comes from white settlers’ incorrect translation of a Cherokee word meaning “new green place” or place of fresh green”. White men under the command of Hernando DeSoto first visited the area in the 1500’s when Native Americans identified as Moundbuilders controlled Georgia. Researches believe the Cherokee began living in the area in the 1650s. White settlers started moving to the area in large numbers during the Gold Rush of 1828 and the Cherokee were later forcibly removed from Georgia and forced west on the Trail of Tears.

The Cherokee, who called it Enotah, respected the peak but worshiped Blood Mountain, unusual in a culture that traditionally took the highest places as holy. Their legends tell he story of a flood that killed all the people except for the families that landed on top of Enotah in a great canoe.” – On-site signage

The existing observation tower at Brasstown Bald was built in 1966. According to Explore Georgia, “The unique circular building is home to an 8,000 sq. ft. museum featuring interactive cultural and natural history exhibits. A short film about the dramatic weather and changing seasons at Brasstown Bald plays regularly in the mountain top theater.”

? COVID NOTES: Call ahead to ensure public restrooms are open.

⏰ HOURS: Monday – Sunday 10 a.m. – 5 p.m. Check the website to make sure the Visitors Center is not closed for the season or due to inclement weather. As long as there is not inclement weather and Georgia DOT does not close the road, the parking lot, trail and observation deck will remain open to visitors.

? PET-FRIENDLINESS NOTES: Dogs must be leashed and are not permitted in the Visitor Center.

? Hikers are warned that black bear sightings are common in the areas around Brasstown Bald

♿️ ACCESSIBILITY NOTES: While the Summit Trail is paved, it is very steep with a gravel break in the pavement where another trail crosses. There is also a set of stairs towards the end of the trail. ADA parking and an elevator are located near the summit’s observation deck entrance.

Built with convict labor in the 1950s, the Wagon Train Trail was originally created to be part of Route 66. According to on-site signage, dozens of families would form a wagon train and follow the trail from Young Harris to camp and socialize here. Congress designated the area the trail passes through as the Brasstown Wilderness in 1986. For this reason, hikers are reminded that most trails, excluding the Appalachian Trail, are not blazed in these areas which are meant to preserve the wild landscape from development. The trail stretches 5.7 miles on National Forest Land and continues on a private roadbed another 1.3 miles until it reaches Young Harris College.

A wilderness, in contrast with those areas where man and his own works dominate the landscape, is hereby recognized as an area where the earth and its community of life are untrammeled by man, where man himself is a visitor who does not remain.” – The Wilderness Act of 1964 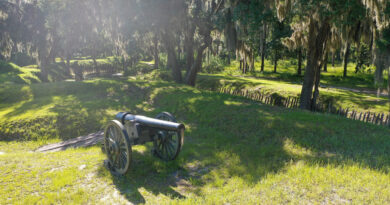 Located south of Savannah on the banks of the Ogeechee River, Fort McAllister State Park is a scenic park showcasing

You’re encouraged to bike or walk to the PATH400 greenway, but if driving is your only option, free parking is 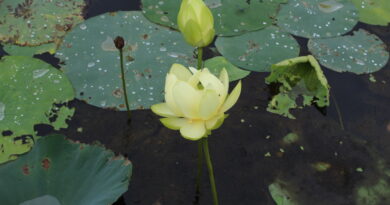